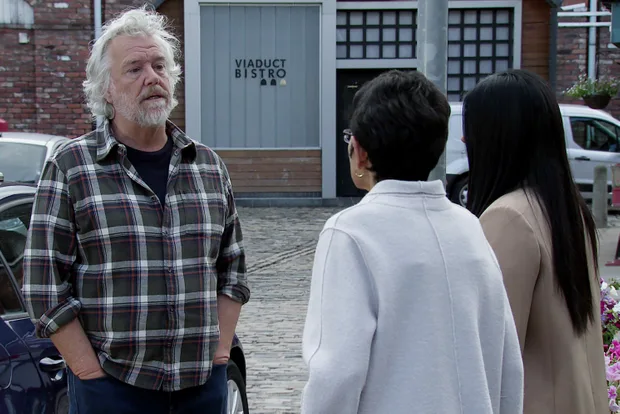 After spending yet another week behind bars, Stu Carpenter (Bill Fellows) returns to the streets the following week to a highly unfavorable response, but Yasmeen Metcalfe (Shelley King) has changed her mind. Before an accident happens, what begins as a fraud for Aadi Alahan (Adam Hussain) and Kelly Neelan (Millie Gibson) becomes much more! And what kind of game is Stephen Reid (Todd Boyce) engaging in as he manipulates Sarah Barlow, his niece, to achieve his objectives?

1. Stu faces opposition as he returns

Stu is now receiving assistance from Alya (Sair Khan) and Zeedan Nazir (Qasim Akhtar), who go through his case files to discover the original interview tapes of Stu. Attorney Adam Barlow (Sam Robertson) notes that Stu was interrogated by the police for more than 10 hours, which is against the law, and that a recording is also missing. After Stu’s recent incarceration for disturbing the peace, Alya visits him in jail. Yasmeen, Alya’s grandmother, enters to hear Stu’s version of what happened when a young woman named Charlie was killed. Stu gives Yasmeen the entire account of his liaison with Charlie when left alone. Later, Yasmeen informs Alya and Zeedan that Stu wants them to speak with his attorney.

who ultimately affirms that Stu was forced into making a murder confession. Stu is astonished to see Yasmeen waiting for him after Alya convinces Yasmeen to let him move back in. She assures him that she thinks he is innocent but counsels him to explain his plans to his daughter Bridget. When Stu visits Bridget once more, how will she respond?

Bernie, Dev Alahan (Jimmi Harkishin), and Tim Metcalfe (Joe Duttine) are hostile toward Stu when he returns to the Street, but his friend Kelly helps him mend fences by telling Tim that Stu is back at the Nazirs’ and that he wants to establish his innocence. Yasmeen is urged to change her mind by Tim and Elaine Jones (Paula Wilcox), and Stu agrees to leave.However, she notes that doing so will make him appear guilty. Will Stu be able to convince everyone he didn’t kill Charlie, and can he actually do so?

Kelly plays along when Ellie from the Gazette drops flyers at the Bistro announcing a contest to “Win a Dream Wedding” while actually she and Aadi are arranging their own nuptials. Aadi is informed by Kelly that they will only get married to take advantage of the free vacation. They have to participate in a Mr. and Mrs. quiz to qualify, so they cross-examine one another. Each of them acknowledges that they have never engaged in sexual activity, and Aadi goes in for a kiss. After their initial meeting, Aadi surprises Kelly with his mother’s engagement ring, making her fall in love! They meet Ellie for the actual quiz later in the week, but they don’t get any of the questions right.However, Ellie concludes that readers will like the couple after Aadi claims that he and Kelly belong together. While Aadi’s father Dev presents him with a car after passing his driving test, Aadi’s sister Asha (Tanisha Gorey) notices Kelly’s engagement ring. Aadi informs Asha that the engagement ring is a fake when she confronts him about it; however, Kelly overhears and, offended, throws the ring back at Aadi before hopping into his new automobile. When Aadi uses Asha’s old bike to pursue Kelly, he discovers that she has collided with a bollard. Kelly, how are you doing?

Stephen interrupts Carla Barlow (Alison King), who is upset about not being able to get a fabric order, and tells Sarah that it is obvious that she is the factory’s business brain. She ought to think about purchasing Carla out of her stake, he continues. Later, Stephen remarks that she found the fabric at a very reasonable price, and Sarah shares her business plans with her uncle, pleading with him to help her persuade Carla that she is competent in what she is doing. Additionally, Sarah coerces Carla into hiring Stephen as a consultant, but Carla tells her husband Peter (Chris Gascoyne) and father-in-law Ken about her misgivings (William Roache). Carla agrees to hire Stephen when Ken assures her that he believes the man to be honorable. Stephen suggests that Sarah take out a loan in the meantime soShe is able to grow the company on her own. But it appears that Stephen has a hidden agenda here given his personal financial difficulties.

4. Aaron is concerned over Summer’s lies

Irresponsible Summer visits her nurse for a diabetes checkup where she is advised to use a flash monitor. Aaron interrupts the conversation and encourages Summer to give it a shot, but Summer tells Billy Mayhew (Daniel Brocklebank) that she is ineligible for the monitor. When Aaron notices her lying, he tells Billy to call the hospital.

When the week goes on, Summer notices Aaron staring at her as Billy and she go to the Bistro to celebrate the birthdays of Paul Foreman (Peter Ash) and Gemma Winter (Dolly-Rose Campbell). When he admits that he wasn’t keeping an eye on her, Summer tries to make up for missing their vacation. She decides to reserve a special night at the Chariot Square Hotel as a result. But when will summer arrive?further drama results from her diabetes’s neglect?

Bernie requests extra shifts at the kebab restaurant from her boss Dev because she is short on money, but he has already set out the schedule, so she is out of luck. Gemma understands her mother’s predicament when Bernie is late for Paul and Gemma’s celebratory lunch. Bernie is reassured by her that Linda Hancock, Joseph’s other grandmother (Jacqueline Leonard), has sent money for his school attire. However, Bernie still needs additional work and inquires about any available pub shifts from Daisy Midgeley (Charlotte Jordan).
Daisy declines Dev’s offer, but Bernie gladly accepts when he makes one about a cleaning job. Then Bernie goes shopping to get Joseph’s uniform and comes back with a fancy blazer for herself.Gemma and Chesney Brown (Sam Aston) encourage Bernie to return the blazer to the store when she acknowledges that it was handed to her in error. A woman by the name of Fern then appears, alleging that Bernie has taken her jacket. Now, what will she do?

6. Will Dylan be heading home?

Dylan Tully (Antony Cotton) is preparing to leave again after spending time with his father Sean Tully (Antony Cotton) while staying on the cobbles, and Sean offers to arrange a farewell meal. However, when his dad is forced to work in his place, newcomer Glenda Shuttleworth (Jodie Prenger) comes up with a plan to make him smile. Sean discovers that James Bailey, a football player, has been invited to Dylan’s party by Glenda and Mary Taylor (Patti Clare and Nathan Graham), when he arrives at the Bistro. Dylan confesses to James that he doesn’t want to go home since he would much rather live in Weatherfield. James proposes they engage in some physical activity before supper. With mum Violet residing far away, would Dylan be retuning to heror will he open up to his dad so the co-parents can come tomodified arrangement? Could Dylan be evolving into a more enduring character?

Steve explains that the original builder Arnie has promised to do the project after all when Ed Bailey (Trevor Michael Georges) and Paul show up to begin work on his roof. However, the scaffolder shows up to take down the contracted scaffolding as he leaves one of several messages for Arnie asking about his whereabouts. The scaffolder claims that leaving it on the roof will cost an additional £500.

In the end, Steve visits Ed and begs him to fix the roof, but will Ed give in? Has Steve now fallen victim to scams time and time again? So, we’d say!