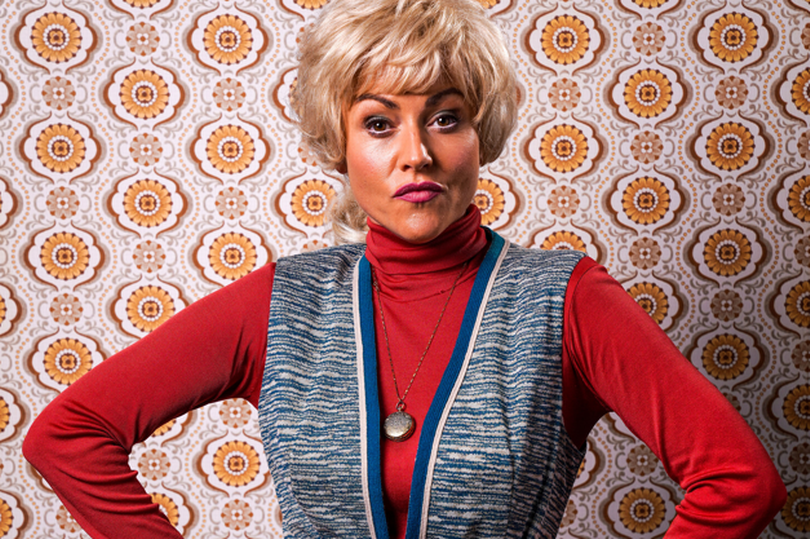 As a result of EastEnders’ announcement that a flashback episode featuring the Mitchell family will take place in 1979, anticipation is growing. Since moving to Albert Square in the early 1990s, the legendary family has been a crown jewel of EastEnders, and the BBC soap will today uncover what prompted their relocation to Walford.

Fans will have to wait to see how the plot unfolds; however, the BBC has revealed the actors who will play the younger iterations of well-known characters. Peggy Mitchell will be portrayed by Jaime Winstone, best known for her roles in Kidulthood.The late Dame Barbara Windsor portrayed Peggy from 1994 to 2010 and again from 2013 to 2016. After receiving an Alzheimer’s disease diagnosis in 2014, Barbara passed away at the age of 83, and her role has not been portrayed since.

Jaime was a perfect fit for the role of Barbara because she had played the character in the BBC biopic Babs, which is based on her life. Love Jaime Winstone, she’s going to be amazing in that role, said one enthusiast. One more said, “Peggy is right on.”

Jaime stated of the part: “It’s been such an honor to step into Barbara’s shoes for the second time and Peggy Mitchell’s shoes for the first time. When you take on such a legendary job, there is unquestionably a good amount of pressure, but I really enjoyed it. I think I’ve done Peggy Mitchell justice, and I’ve loved every minute of portraying her; playing this part has truly solidified my love and appreciation for Barbara.

I eagerly anticipate everyone watching the episode.

The BBC also revealed that Daniel Delaney would play a youthful Phil Mitchell, filling in admirably for Steve McFadden.

Many people who were commenting on the news noticed the similarity. The Phil casting is perfect, according to one commenter. Others, however, weren’t persuaded, with one stating, “Phil and Grant are too nice looking.”

Teddy Jay will take up the role of Grant Mitchell from Ross Kemp, who played him from 1990 until 2016.

Characters from the past of EastEnders who have never been on television will also appear in the episode, including Peggy’s husband Eric (George Russo), Billy Mitchell’s elder brother Charlie (Charlie Heptinstall), and Billy and Charlie’s father, Stephen (Dean Roberts).

“We’re happy to be welcoming an extraordinary group of performers to set for this special flashback episode, featuring the dazzling Jaime Winstone as a young Peggy Mitchell,” said Chris Clenshaw, executive producer of EastEnders.

Focusing on the Mitchell family, viewers will go on an exhilarating voyage to the East End of London in 1979 where they will delve into the family’s background, meet characters from the show’s past who have never been on film before, and witness beloved and legendary characters.

There are surprises, turns, and secrets revealed; after all, when The Mitchells are involved, danger is never far away!