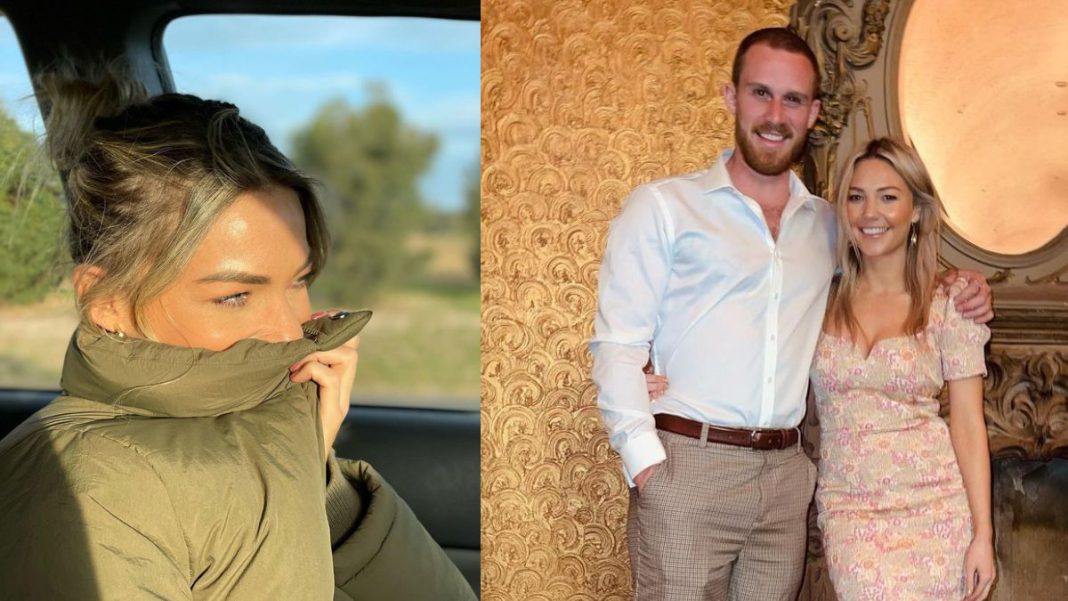 Frost is engaged to former Australian Survivor contestant Jordie Hansen and they are expecting their first child.

Sam Frost, a former star of Home and Away, revealed in a new edition of her podcast Jordie and Sam’s Rural Roadtrip that she suffered a bad accident.

Frost and Jordie Hansen, a former Australian Survivor contestant, are expecting a boy as their first child together.

Recording from the Sunshine Coast, Hansen said Frost was doing amazingly, despite being in a certain amount of agony.

“We’re at the beach, it’s a beautiful day, not a cloud in sight,” Sam said.

“Do you know what I love about you, Sam?” Jordie then chimed in.

“No matter what, no matter how you’re feeling, no matter how much you’re hurting, you always turn it on and give it your best effort as soon as the microphones come on.

You currently have a pretty sore ankle that has ballooned in size, and I’m quite proud of you for that.

Sam confessed, “I tumbled down my driveway.”

“Fall down the driveway, tore some ligaments in my foot, had a huge-a** gash on my leg,” the speaker said.

Jordie continued, “And that’s why we aren’t out and about exploring today.

The duo also announced they were launching a new Rural Roadtrip YouTube channel during the episode.

You will now be able to see, not just hear, all these magnificent places we’re visiting, Jordie remarked.

“That’s what the kids are telling us, so we’ll give it a try.”

The answer to the question of how Frost is managing her pregnancy while suffering from damaged ligaments wasn’t pleasant.

She said, “I feel like a gigantic hippopotamus, and I’m growing.”

Recently, the 33-year-old stated that she and Hansen had relocated to Noosa.

She shared a photo of herself on Instagram while standing by the beach and displaying her growing baby bulge.

“We thought it would be a beautiful place to raise our little boy,” she added.

But we’ll be visiting friends, relatives, and working intermittently while travelling back and forth between Sydney, Melbourne, and Adelaide.

Frost added the hashtag #home to the post and tagged Hansen.

Frost’s friends and supporters went to her to express their congratulations and best wishes for her new residence.

“Bubs is so lucky – hello sunshine!”

“Gorgeous – Noosa suits you,” wrote another.