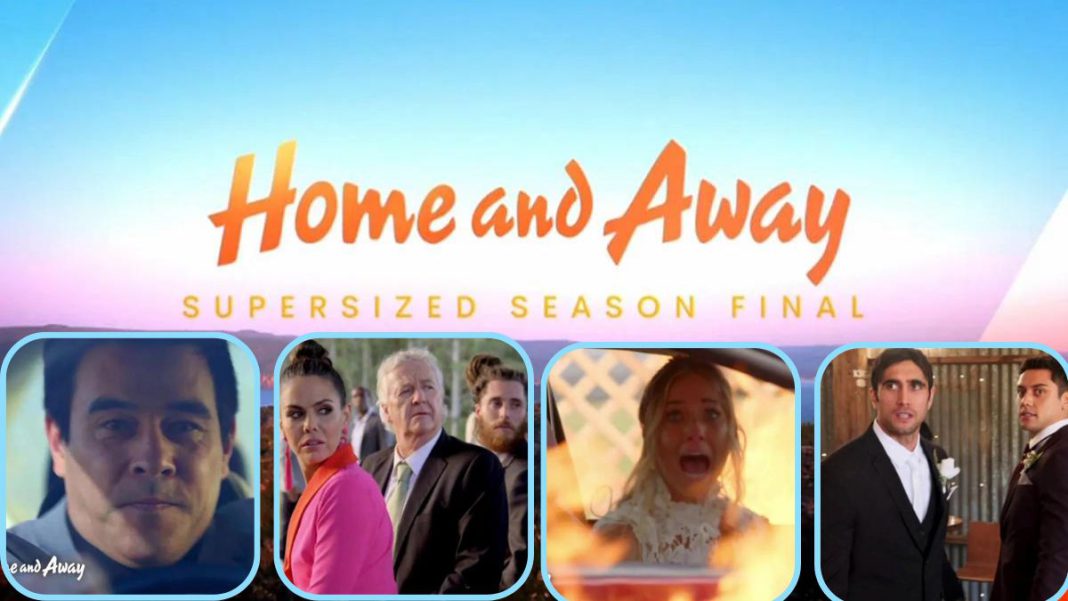 A new promo has been released for Home and Away’s supersized 2022 Season Finale, as Felicity gets cold feet as her wedding day arrives, and a car heads for disaster.

While Home and Away has already ended for UK viewers, Aussie fans have one more day left. Monday 28th November will see the show’s ‘supersized’ season finale air from 7pm until 8:30pm on Channel 7, bringing another year in Summer Bay to an end.

The synopsis for the final episode reads: “Eden stays strong for Remi. Ziggy and Dean struggle to fit in at birthing class. Cash opens his heart to Eden. The bride is driving towards disaster.”

Many aspects of this year’s finale were made public a few weeks ago, but a new trailer suggests that Felicity (Jacqui Purvis) will experience second thoughts as her wedding day approaches.

Fortunately, it appears as though she resolves the last-minute problems as she and Eden (Stephanie Panozzo) depart in her dad’s old truck that Cash (Nicholas Cartwright) and Justin (James Stewart) have lovingly rebuilt for her, but calamity is in store…

Felicity previously had cold feet about her wedding, starting the moment Tane proposed.

The fact that Tane popped the question with Nikau (Kawakawa Fox-Reo) and the Lyrik band members watching meant that Flick felt pressured into saying yes, not wanting to embarrass her boyfriend in front of so many people.

However, it seems Monday will see her wedding nerves come flooding back.

A picture of their new wedding location, a rural farm, opens the advertisement. After learning that his future wife was a country girl at heart, Tane recently abandoned plans to wed her at the beach. The new location is much more Felicity’s style.

Cash is seen waiting for Felicity and Eden at the entrance by himself. He must be hoping that his sister will actually decide to show there because he is aware of her worries.

We then see Tane looking nervous – is he already worried that his fiancée is having second thoughts?

The next shot shows Felicity in Cash’s room in the dead of night – presumably on the eve of the wedding – as she tells him, “I’m kinda freaking out a bit.”

“Marriage. Life-long commitment to one person.”

The promo is interspersed with flashbacks to happier times.

“I can’t wait to be married to you,” Tane says to Flick, as she replies, “I’m so happy right now.”

However, we then hear her say, “please tell me I’m doing the right thing.”

Mackenzie (Emily Weir) reassures her, “this is one of the biggest days of your life. It is so normal to feel nervous.”

Despite Felicity’s heart-to-heart with Cash the night before the wedding, it seems he hasn’t calmed her nerves, and he gives her some tough love as her jitters continue on the morning of the wedding.

Cash, Felicity, Eden, and Gary (Peter Phelps), the members of the wedding party, are all dressed and appear to be prepared to leave the Parata residence. Until Felicity’s nerves return with a vengeance, that is.

“Do you have any idea how lucky you are?” Cash asks his sister, angrily, as Eden watches on in the background.

Felicity then runs into her room, slamming the door behind her.

On the verge of tears, she shouts through the door to the others: “I’m gonna break his heart and I don’t want to.”

The promo also shows Felicity paying her husband-to-be a visit on the night before the wedding.

“Isn’t it bad luck to see each other before the wedding?” questions Tane, but Felicity doesn’t care.

“I think we can handle a bit of bad luck.”

She may live to regret those words.

We already know that Felicity overcomes her worries, as she and Eden eventually get into the newly restored ute and head towards the venue.

A previous clip of the finale showed her and Eden driving out of Summer Bay, as Felicity excitedly screams out, “I’m getting married.”

Yet they never make it to the venue.

The new promo finally establishes that two car crashes, one of which involved Justin and Leah and the other which involved Eden and Felicity, were brought on by faulty brakes.

As Felicity and Eden drive through the country on the way to the venue, we see Eden move her foot from the accelerator to the brake.

As she does so, fluid splutters out from underneath the car, as the pair realise that they’re unable to slow down.

Has Justin messed up the repair, or has someone sabotaged the car?

“Where’s Felicity?” asks Mac, nervously, as everyone turns around and looks towards the back of the venue.

Have they seen Eden rushing in to raise the alarm?

A prior advertisement, which was broadcast during Seven’s upfronts, depicts the dramatic effects of the malfunctioning brakes. The number of scenes that will appear in the season finale is currently unknown, though some may appear in the premiere of 2023.

We see Felicity and Eden drive at speed through the country roads, coming close to the van in front of them.

Unable to brake, Eden goes to swerve around the van, not realising that Justin (Ada Nicodemou) and Leah are in the other lane, and suddenly the two are on course for a collision.

Justin swerves sharply, sending his car off the road and causing it to fly through the air.

That doesn’t end well, and a fan photo taken during filming shows Leah bleeding from her abdomen.

Flick and Eden eventually come to a stop a few miles down the road after crashing into a concrete barrier.

It’s then revealed that they’ve actually crashed into a petrol station, and, as petrol leaks out of the car, it suddenly ignites.

The dramatic promo showed flames licking either side of the ute, with Felicity still inside!

It is currently unknown if Bree (Juliet Godwin) and Jacob will appear in the final episodes (Alex Williams).

After going AWOL from his job in Western Australia, Jacob returned to Summer Bay in the triple-bill of episodes that aired Thursday night in Australia. Bree recently filed an AVO against her husband after finding the strength to file a domestic violence complaint against him.

Unfortunately, upon arriving back in the bay, he soon caught sight of Bree and Remi (Adam Rowland) together.

Later, he found Bree at her motel and insisted she pack her belongings and go with him before Remi stopped the two of them.

Before leaving with Bree, Jacob bound Remi and broke his hand, possibly ruining his career as a musician.

Will the police find Bree and Jacob in the climactic episode, or will we have to wait a nervous few months to learn whether Bree manages to flee her captor?